I make no apology that Christmas preserving is going to be top of the list for the next few posts.  It’s so exciting and with it only being our second Christmas here, we’re still developing new ways and traditions.

Yesterday was Stir Up Sunday and we made our Christmas Pudding which I posted about but I also made the sweet mincemeat, again something that I haven’t made before.  It smelt amazing!  I can’t believe how easy it was to make.  Thank you to Lou for spurring me on to do it, just by being her.

Last year I treat myself to Mary B’s Christmas recipe book, worth every penny I have to say and this is the recipe I followed.

I used dark rum as I had it in the pantry and wouldn’t use it for anything else, so in it went. 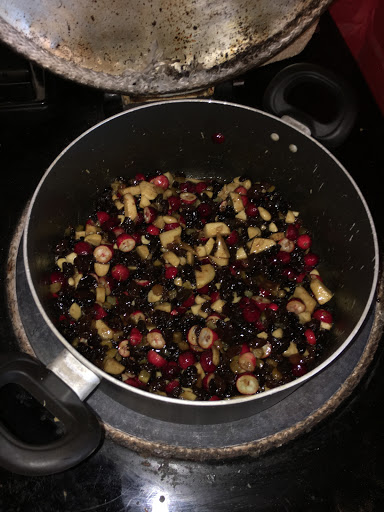 I used fresh cranberries opposed to dry as stated in the recipe, which after a couple of frantic messages with Lou, I decided to follow the recipe regardless and just leave it in the simmering oven for a bit longer, to cook them through.

I’m very pleased with the outcome, 4 good sized jars.  We’ll be making mince pies with this soon, so I hope it tastes nice.

Christmas is coming and I intend to enjoy every minute! 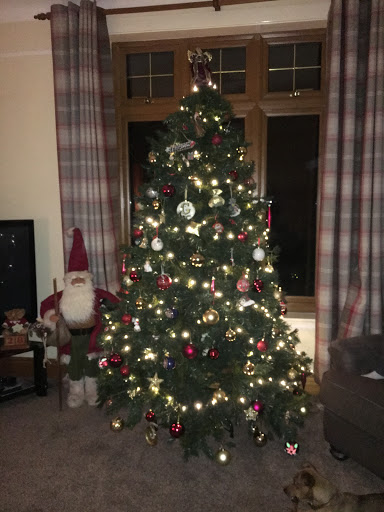 I wouldn’t expect to be saying in October, almost November that I had basil growing in the greenhouse.  In fact, I’m pleased that I managed to grow any basil at all.  I’m having one of those realisation moments when I think about how far we have come.  We hadn’t successfully grown anything before we moved here and to think I am preserving regularly and enjoying meals from the veg plot is a really satisfying feeling.  Preserving in general is a great feeling for me, be it shop bought, gifted or grown items and I hope that even if just one person could be inspired to preserve as a result of these posts then that would be amazing.

The basil I grew are green and red.  The red one came free with the Grow Your Own magazine that I subscribe to which send seeds with each order.  I also grew standard green basil which just loves to grow and I plan to fill my window sills with it next year!

Tonight I started to tidy up the greenhouse and brought the basil indoors.  The kids picked the leaves off for me and they did a great job.  Grace washed the leaves and put them in the salad spinner for me.

I put both red and green in together so I hope they will work out.  I sterilised a jar and packed the leaves in.

Once full of basil leaves, I filled with olive oil and put some cling film under the screw top.

It’s now on the preserving windowsill with the plum wine (which is going 2 different colours randomly).  It’ll stay here for 2 weeks before being strained and rebottled in time to go in the Christmas hampers.

A really quick, but hopefully tasty preserve.  I’ll use this to cook with and also as a salad dressing to remind me of long lost summer days 🙂
The onions which we planted towards the end of last year were harvested a few weeks ago and have been happily drying in the barn.  Now every single one of the red onions bolted and tried to go to seed.  The white ones are fabulous though.  They were planted as sets which my old next door neighbour told me are more prone to going to seed, so I’ll bear that in mind for the next lot.  With this in mind, the red ones need to be used up first.
So I picked a recipe from Pam’s book that used some of these onions and the redcurrant jelly that I’d thought was done for.

2kg of onion went into the food processor to be finely chopped.  They were put on a low heat with 100ml of olive oil and cooked down for 40 minutes.  Then I added 200g of demerara sugar and 150g of redcurrant jelly and left it on the low heat for another 30 minutes, moving it to the higher heat for a few minutes at the end.
The colour wasn’t exactly inviting at this point!
I took the pan off the heat for a minute or two and added 350ml of cider vinegar and 50ml of balsamic.

It cooked on a higher hear for another 10 minutes and when I could scrape the pan clean in one pass of the spoon, it was ready.  This made 5 good sized jars (which I didn’t take the labels off as I was sick of trying).

This will be used with cold meats and cheeses, toasties and pork pies and the like but one jar will be kept for Christmas to have with the Christmas ham.
Most importantly to me it’s used the jelly which I thought would stay in the pantry forever and 2kg of our own onions. Perfect seasonal preserves!

When I think of preserving, my thoughts don’t always lend themselves straight to the freezer which is crazy really as it’s one of today’s modern options for preserving our harvests.  This week we have switched on the new (to us) chest freezer that we were given, as we will shortly have the pigs to fill it.  It seems to be working fine thankfully, got to love a freebie.
So that got me thinking and when I wandered round the veg plot the other morning I noticed every single red cabbage was doing great and they would need harvesting very soon.
So for my Monday preserve, I decided to trial a Christmas cabbage recipe as those of you who were hear last year know I love red cabbage at Christmas!  It freezes amazingly and tastes even better afterward in my opinion.
This new recipe from BBC Good Food which is Spiced red cabbage.

I’ve used 2 heads of cabbage for this recipe as mine came in short of the kilo that it recommended, but not far off.  I also used 2 red onions of my own, very satisfying feeling.  Don’t the cabbages look pretty?

Method taken from BBC Good Food.
Sweat 2 onions and add the zest of an orange and a cinnamon stick after 5 mins.  Give them a minute to fuse and then add the cabbage (shredded and washed), 150ml port and a dash of red wine vinegar.  Bring to the boil and then simmer for up to an hour.  It looked delicious!

We also dispatched our first Ross Cobb chicken at the weekend which was to see how big it was based on it’s current age (9 weeks).  We’re wanting to slow grow them but trial and error as to when they would be ready.  Well it surprised both of us, already weighing in as a table ready bird of 1.8kg.  I’m really pleased as this is a milestone for us, meaning we will never have to buy shop bought chicken again!

For those who are interested we also did a cockerel, but he will be as tough as old boots I think (weighed in at 3kg, a Rhode Island Red) and we did them using our new area set up specifically for working on the poultry.  As this is a preserving post and to avoid upsetting people just looking for preserving info, I’ll post about that in another post later this week.
So our freezers are now starting to fill up nicely for the leaner growing months ahead.  We’re one step further onto the path of self sufficiency (long it may be!).
What a week of harvest! It’s a full time job when things get going isn’t it? We harvested everything in the below photo on Sunday.
Buster is just making sure things are in order. 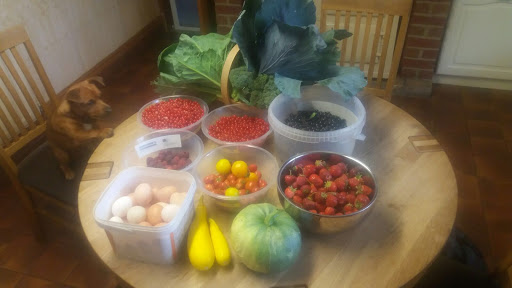 Now technically I don’t think toffee vodka is a preserve? Regardless it is going on my Monday night slot as the quickest, simplest vodka recipe we have done so far.  Ste’s Mam mentioned that she had some toffee vodka last Christmas and she really liked it.  We popped a packet of Werthers in a litre of vodka and hey presto, job done. We are shaking it twice a day until the toffees dissolve completely. 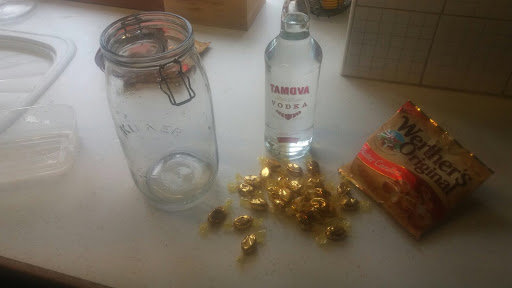 The colour isn’t that attractive but we’re told it’s a lovely warming drink on the cold winter nights.  What I didn’t realise is the kilner jar is a 3 litre one!  Not to worry, it’ll be freed up soon for the next item and this won’t take long to dissolve. 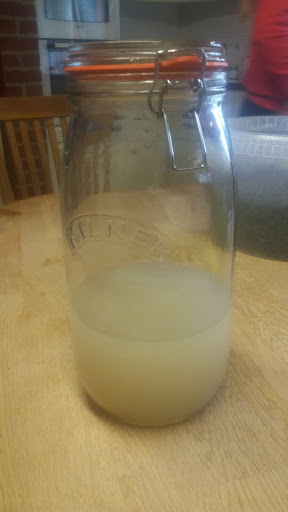 Next up was another alcoholic Christmssy drink.
Earlier this year I read on Tricia’s, Tarragon and Thyme blog about cherry brandy and thought we have to give that a go.  We’ve just harvested cherries from a couple of our trees before the birds got to them so the perfect opportunity to give it a go.
Again, it is very simple to do.  We added pierced cherrys to a bottle of brandy and 300g sugar. For extra Christmas feel I popped a cinnamon stick in too. In a couple of months we will strain it all and keep the cherries for something else, no doubt also Christmassy. 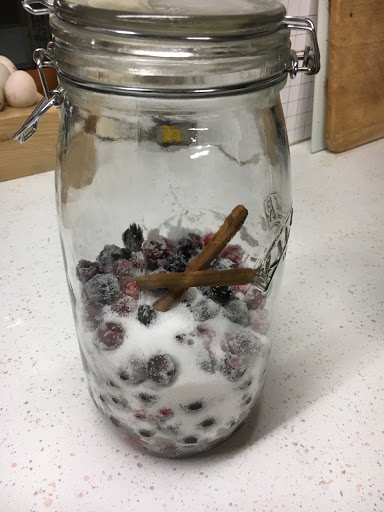 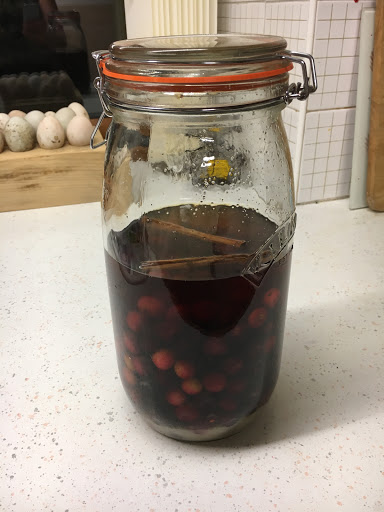 Next up on the harvest was the currant bushes. Goodness me they take a while to harvest but it was enjoyable as we all sat around the currant bush and just chatted on together.
We harvested 1.6kg black currants (this time) and 2.5kg red currants. It was our second harvest of black currants, the first lot are in the freezer.
The black currants were made into a super quick cordial and some of the red were too. Recipe as follows:
Put 1kg berries and 300ml water on low heat and simmer for 10 mins. Mash with potato masher to speed things up. Don’t do this is you prefer a clearer juice (you’ll get less cordial for your money if you do that though). Strain through a muslin cloth and the resulting juice should be added to granulated sugar:  for every 500ml liquid add 300g sugar. Stir over low heat until the sugar has dissolved. Add 1tsp citric acid and stir. Bottle into sterilised bottles. It is delicious. These will be used quickly so we didn’t water bath but if they were for Christmas then we’d water bath. 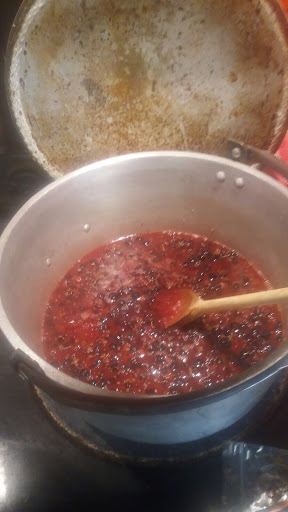 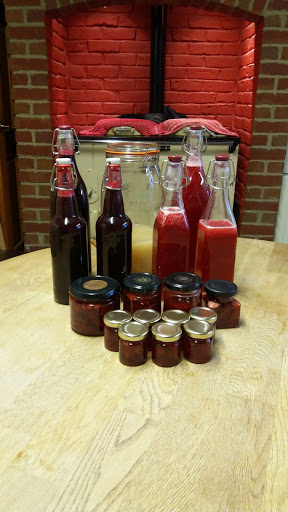 You will see I also made more strawberry jam which I’ve blogged about before. I’m sticking with that recipe as it’s divine and I have received so many compliments for my first batch that I don’t want to change a thing. On potting up, I filled these jars even more than last time, so they were virtually over flowing. Fingers crossed it is as nice and for no mould!
I’ve also started some redcurrant jelly tonight which I’ll finish telling you about tomorrow as when I’ve gone to make the recipe tonight, I need to let it drip overnight.
Here’s what I’ve done for now.
I’ve added 400ml to 1kg currants and simmered for 45 minutes. I’m draining this through a jelly bag tonight ready to finish tomorrow night.
Loading Comments...