Skip to content
I’m still figuring out what day of the week works best for blog updates.  I think Monday’s are a good starting place as we can wrap up what we’ve done over the weekend and previous week.  Let’s trial it and see.  At the moment I’m also finding our what structure I might have, so until then, it’s a bit of everything 🙂
What are we up to right now?
Well, it is well and truly back to work and school this week, so all routine’s are resumed (some in an improved fashion) and we can all go back to knowing what day of the week it is.  I remember many years ago when Steven and I were very happy to have no routine.  How things have changed!  In a good way that is.  The fact that living on a smallholding demands routine, and more so planning, is something that is all to obvious the longer you live on one.  I bet many other people and places can relate to that too, not just smallholdings.  Running a family, working full time, being a stay at home mum, caring for people, looking after animals – it’s all so much easier if you have a routine and a plan.
Sunday night saw me updating my files with the design of the main veg plot, and using RHS’ 4 year veg crop rotation (legumes, brassicas, potatoes, onion/roots then back to start) to plan what can go in the beds this year.  Inevitably we have beds that it doesn’t make sense to grow “that many” of something, so these will become the beds where the crops that don’t need to follow rotation will go.  Squash, the prolific and much loved (a’hem hated) courgettes, cucumbers, French and runner beans, sweetcorn and salad).
We haven’t bought any seed potatoes, spring planting onions or garlic yet.  We will probably look to do it at the end of January.  Ideally this year, we will have early, salad, main crops & lates so that we have as much coverage through the year as possible.  To be fair, our main crop from last year are still going well, despite the mice’s best attempts.
Something that has become obvious over Christmas is that Jack too needs a plan.  We give our kids jobs to do around the smallholding.  Be it looking after animals (feed and water) or clearing the table to making your own packed lunch (as much as possible) and so on.  Annie, our bullmastiff, very much appreciates all we do for her and gives us lots of cuddles in return! 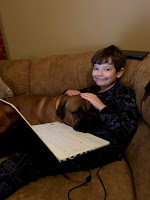 This weekend we decided to cut back the apple trees in what we call the orchard.  It’s not a huge orchard, a handful of old, established fruit trees which we have rather cautiously taken one or two branches off in the winter before.  However, last year they took over but bore no fruit, so we promised ourselves we would be ruthless when it came to cutting them back for 2020 fruit.  Below is one of the cooking apple trees that has been prolific in previous years.  Fingers crossed it comes back well this year. The photo is before and I don’t have an after shot, I daren’t show you! 😉 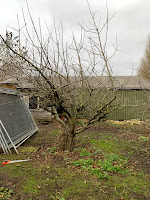 The mice I mentioned before, the ones who ate the potatoes in the shed.  Well, Steven built that shed and we knew there wasn’t a single crack or hole in it and we couldn’t figure out how they were getting in!  Well I think the mice are rats, as we found the hole when giving the shed a clean out this weekend.  You’d think it had been done by machine looking at it, but you can see the teeth mark on it.  Bloody things.  Rat trap going down and the hole will get covered.  They get everywhere! 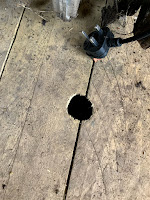 Speaking of shed’s, this one we bought a while ago to house poultry.  I can’t remember what it was at the time, however now it’s for chickens.  It’s getting too small though, as we had a shift around this weekend after processing 10 cockerels.  That left us 4 hens from that hatch that could go in with the other hens.  More room was needed so Steven ingeniously cut some nest box size holes out of the wall of the shed and moved the nest box from inside to outside, giving them extra space.  They roam during the day and just us this space for laying eggs and perching at night.  A great idea!  We’re going to do the same on the other side too as there’s a fair few in there now and no doubt they will all want to lay glorious eggs at the same time come spring!
Another job that got done was the cleaning out of the goose pond and IBC tank that feeds it.  Both in dire need.  Unfortunately, the pond water has since dropped, so there’s a hole in the liner.  We will have to get another one as the water will be used by the geese and ducks when we set up our new area.  This is on the jobs list but not an immediate issue as the geese have alternative options and we don’t have the ducks yet. 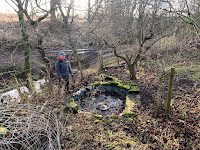 This post is turning in to “what has Ste done”  – I do more than just take photos honestly!  For Christmas, Ste got lots of tools that he’s now having a play about with to see what he can use them for, making lots of little things like this in the process!

So what have I been doing.  I managed to get a freezer inventory done of the big chest freezer and of course we had loads of things that I’d forgotten about and will shortly be making an appearance on the menu plan.  I’ve also draft menu planned a good few weeks ahead, easily once you get in to it as for example we had lasagne the other day and I won’t be adding it to the plan for another 4-6 weeks ish, as we will have other pasta dishes on “pasta day” in between, plus with it being SO calorific, it’s a once in a month or so treat.  We’re both cutting back, as is everyone no doubt, after Christmas, so this kind of rule setting helps with that too.
I’ve decided on a framework for the menu plans, which helped dramatically.  For example Monday’s is a curry night, Tuesday’s will be fish or stir fry (Sunday left overs?), Wednesday’s is pasta or rice based, Thursday’s casserole/stew, Friday is a bit of a free for all such as gammon, chops, steak (yeh right), burgers etc.  Saturday is always a fry up at lunch then family teas on knees, easy meal & Sunday for the most part it is roast at noon and soup/farmhouse bread for tea.
Thanks to my dear friend Lou (visit here), I’ve got myself a household notebook together and am getting myself in order with writing everything down.  The freezer inventory, menu plans, shopping lists, outgoings and expenses, to do lists, jobs lists, daily routine lists, veg plot planning and so on.  Just talking these things through helps.  So although there isn’t a lot to show outwardly, I’m busy busy.
This week, we have managed to save some extra pennies unexpectedly, only small amounts but every little helps, so they will be put to one side instead of being consumed in to the wider pot.  We have set ourselves a financial target of what we would like to save this year, starting from zero.  I won’t be sharing figures in that respect as it’s all relative.  %’s would be better I think.  So we are at, 0.01% 🙂
I wanted to share with you the below picture which I stopped to take when I came in the other night, I’m so proud of the space we have created outside (Steven again!).  It looks cosy, is very practical and hopefully will add value to the smallholding if we ever move in to another chapter 😉 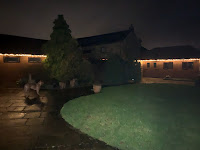