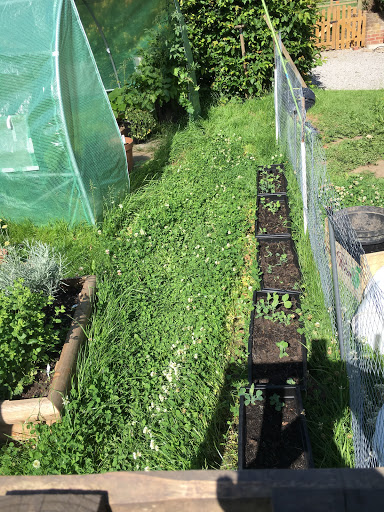 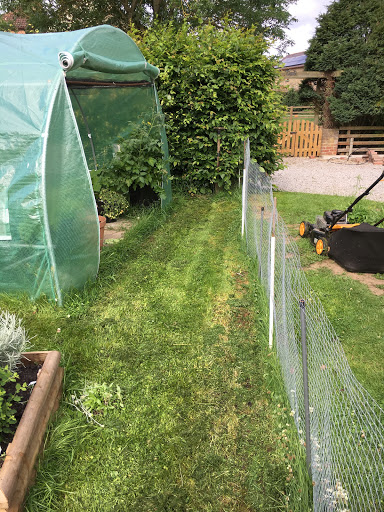 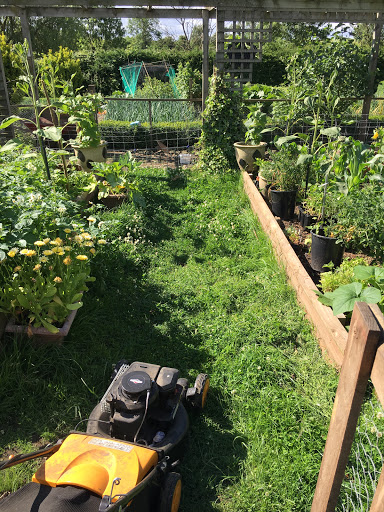 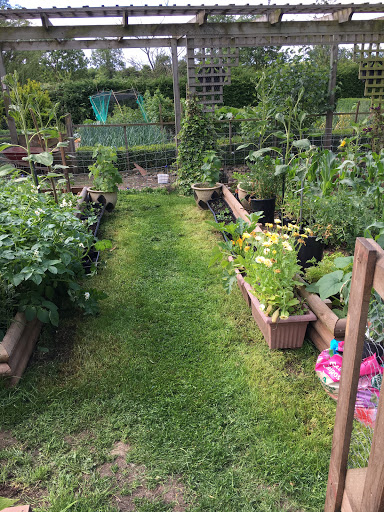 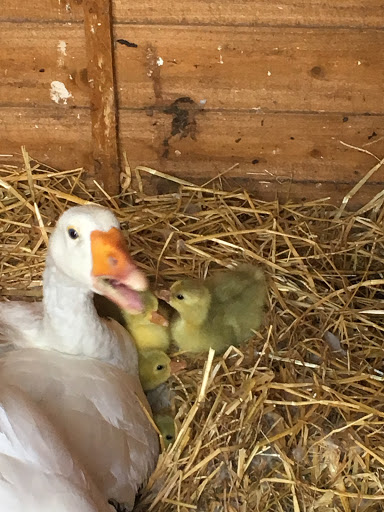 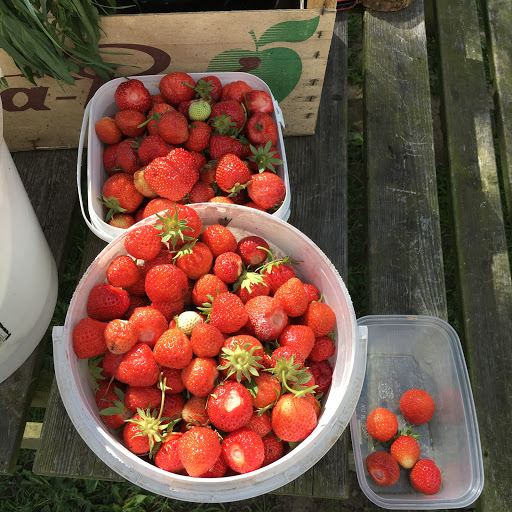 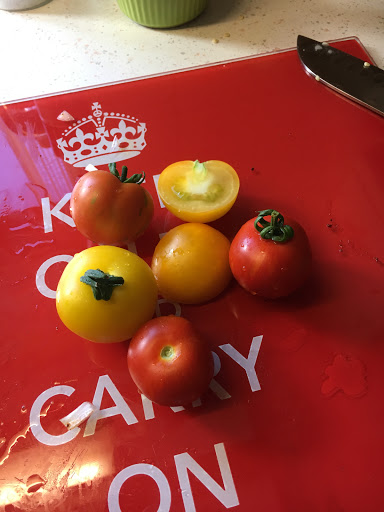 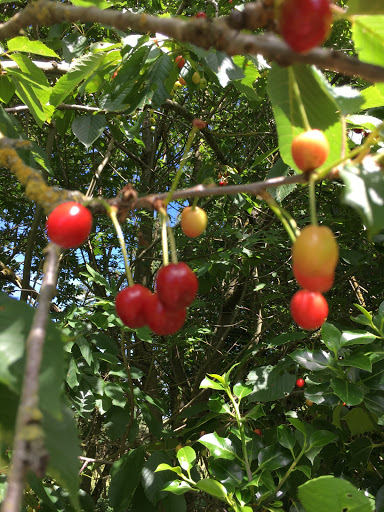 We have slowed down in people who are wanting muck from us, the Spring surge of keen gardeners has wilted to a snail’s pace.  Of course that’s the cycle.  We did however have a regular guy take a trailer full from us at the weekend, which made a dent in our ever increasing manure pile!  In an effort to slow down the bedding going on the heap over the summer, I’ve started putting the ponies out a lot more now the weather’s picked up.  It is catch 22 as we want the grass to come through enough to keep them but also we want them out on it!
So in an effort to allow both the boys and girls out together and to reduce the impact on the grass, Steven has put up a new fence to create a small paddock around the ground we lovingly named “Thistle Paddock” as it was overgrown and unloved when we moved in back in January.  The fence looks great, but they aren’t cheap to buy are they?  We are using electric tape around the other parts of the paddock, until we can afford the rest.  The tape will only do its job for so long though as they boys desire for the nicer looking grass will overcome their fear of the tape!
Although we now have a cow problem!  Next door’s cows are constantly trying to get in with our horses and by God do they knock stock posts out easily.  They’re going to do themselves an injury if they aren’t careful as they insist on getting tangled in wires and walking on the most inappropriate place.  So if anyone has any techniques to keep the cows away, I’ll be happy to hear them!!
Over the bank holiday weekend we had family and friends over and it’s been a lovely time.  It has meant that I have got nothing done that I should have though and the house is looking unloved and in need of a good tidy and clean.  The problem is we’re so limited on time during the week and at the weekends people descend on us or we find more important jobs to do.  We’ll get round to it, at some point!
Our hens are well and truly paying for themselves now.  We have made over £40 in egg sales over the last 3/4 weeks, so say average of £10 a week.  That will pay for their next round of food and hopefully we will get to the point where we have a bit extra in the kitty too.
The goslings have finally hatched too!  We haven’t got any decent photos yet as they are really protective of them, understandably.  As soon as we can, we’ll get a few good shot of them.  We’ve sectioned off what we can to make their area gosling proof but as you can imagine, on a smallholding, there’s only so much you can do and we’ve decided to let Mam do her job and what will be will be.  The geese have been managing for years and years without our help, so I’m sure she has this in the bag!  We’ve already got 2 requests for Christmas geese and a request to buy some for a community corner that a local resident is putting together.  We’ll see, we don’t even know how many we have yet, or indeed if they’ll make it.
Our rescue girls are doing really well despite losing one of their friends a while back.  They’re contributing the most to the £10 a week money.  They make me smile every day, they seem to have so much more character and need for interaction than our pure breeds and older girls.  It’s lovely.  We’ve tried to find more to rehome, but nowhere has any dates available yet.
Our growers (the ones we hatched out first) are coming on leaps and bounds, literally.  The cockerels are learning to crow and the hens are flitting around as they see fit.  They are 11 weeks on Saturday so they will have to stay in their separate bit for a while yet.  That leaves us with a dilemma of where to put the 6 chicks that we have which are only a few weeks old as they are due to go out soon, especially now the weather’s picked up and they can feel the sun on their backs.  We may have to make a makeshift pen next to the rescue girls until we can put the growers elsewhere.  We do have a long term plan of where they will go, but it’s whether we will have the time before we go on holiday.
Veggies wise, I’m hoping that now the sun is back, that we will be able to get into the veg plot again and with Steven’s man power and my planting skills, we can put the rest of the plants in that are looking sad in their small pots waiting to be planted out.
I counted my tomato plants last night and I think there were 23, but a few of which may have been lost to the frost.  I’m thinking about putting a few of them into their grow bags at the weekend and see how they manage.  I bought some tomatorite thinking I should be feeding them now, but the bottle says to feed when the fruit starts to form.
The potatos aren’t looking great at all.  The little green shoots that started to appear have gone brown and slimy.  Should I have covered those little green shoots with more earth?  I’ll try and post some pictures soon as I forgot to get some when I was investigating last night.
Also, on spuds, we bought a huge bag full and they’ve all sprouted, they aren’t seed potatoes but eating ones and were intended for our tea.  There’s just too many though. Some of them have 6 inch shoots on then, can I plant them?

Today we had one of our questions answered. Mammy goose can look after the goslings but only to an extent. Sadly, we lost one of our 5 to drowning. He was only a day old. We’ve taken it quite hard as really, we could have prevented it. Poor little thing. He’s buried near where he would have lived. Needless to say, tonight Steven has rigged something up to help them stand somewhere safe if they need to whilst they catch their breath and made it easier for them to get out the pond.
In other news, we’ve started moving a load of crap from the pony paddock into the woods. We were going to burn it but decided it’s too close to the woods already plus if the ground underneath it isn’t already dead, it soon would be with a fire on it. Once that’s done it’ll really make a difference to the size of the paddock. I’m suffering now mind you, midgie bites!!
To cheer us up after a sad day, here’s a couple of pony and horse pics.
Oh and I wrote a huge long post in response to being nominated by Louise for the Liebster awards and bloody lost it. So I will redo it asap. I quite enjoyed it!