When we got our first pigs in 2017 it started us along the path of dabbling in being self sufficient in meat.  We thoroughly enjoyed it and the pork lasted us over a year!  Since then we have raised lots of our own poultry and haven’t looked back.  This strange old year has seen us acquire our second lot of pigs, something we plan on doing every year now.  They really are lovely to have on the smallholding and (so far) have been no hassle at all.

Since April 4th, we have raised 2 Gloucestershire Old Spots cross’ which were12 weeks old when we got them.

They are truly a fantastic breed of pig to raise based on temperament alone.  They are going to be with us until early October and then heading to the butchers as ultimately that is what we raise them for.  However there is a dual purpose to having pigs on a smallholding, especially if you need ground turning over!

Below left is the land we started with in 2017 and then after we left it lay fallow through until 2020, shown on the right (or bottom if on mobile).  We didn’t want to run pigs on the same ground too close together in case the area became “pig sick”.  Not only did we want perfect pork, from free range, outdoor raised pigs but we also wanted the land to be used to grown on for 2021.  Manured from 2020 pigs and not a nettle in sight as they had them for their supper.

As is always the case here on the smallholding, it was all fin and games deciding how to bring them home as we don’t own a trailer.  It seemed silly to use a favour (where we normally get our trailers) for 2 small piglets (weaners) so we set about adapting the car, smallholding style.

We, Ste, made a pig shelter out of an old IBC tank which we filled with straw and saw them lovely and snug.  As they got bigger he cut their entrance bigger and eventually gave them an extension.  It was so funny watching him try to convince them to use it!!  Incidentally, it’s made out of internal house doors that we got free off Facebook Marketplace.

The pigs had 2/3 of the land we have planned to grow on and during Spring and Summer 2020 we didn’t leave the other 1/3 of the land go to waste.  I spent what felt like an eternity covering it with rotted horse muck until you couldn’t see the grass any longer.

Eventually it was ready for the potatoes I’d decided to grow there.  I literally pushed the potatoes in to the muck and covered them with grass clippings and spent straw from the duck house (ok to use straight from the house unlike chicken manure).  The potatoes were fantastic and we are eating our way through them now.
Once they were done with, we opened the, now HUGE, pigs up to work through the area, clearing any remaining potatoes we’d missed and eating any nettle roots that hadn’t died off.  As Ste took the pallets down to open the are up, the pigs naturally helped. 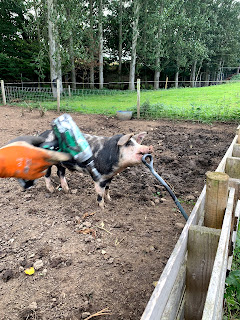 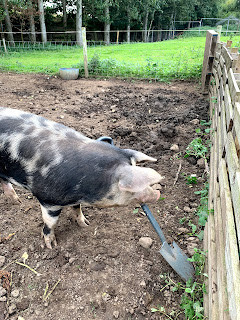 They have done a fantastic job or turning the whole area over and I can’t wait to get growing in it for 2021!  We were thinking of putting a commercial size polytunnel there but I think on reflection we should grow in the space and see if we can manage it, before committing to such a big spend.  There’s still a little section of the ground, shown below, with some fruit trees in it.  We are taking those out once they are dormant over Winter as it’s not the right place for them.

So I hope this post has shown you why we raise pigs and in one of the next posts I will show you what meat we have filled our freezers with and how we plan to use it.  I’ll keep them separate to this one, so those of you who prefer not to know, don’t have to look.

3 thoughts on “Why do we raise pigs? It’s almost time…”