Throughout September, I’ve been looking at my plans and taking advantage of free P&P from some of the seed companies, specifically T&M in this case.  I’m super excited to receive my seeds that I’ll be getting sown through September.

Whilst researching I came across a variety of spinach called Giant Winter which I can’t wait to see growing.  It is expected to reach maturity in just 50 days and is specifically for growing over winter.  In fact you shouldn’t sow this variety in Spring as it will bolt.  It’s also an heirloom variety meaning I could keep my own seed from it.  Culinary wise it can be used for baby leaves or cooked once mature.

We use spinach a lot, in salads, soups, smoothies, stews and stir fries so it is something I would love to grow all year round instead of getting a pack from Aldi every week.  I am also planning on growing perpetual spinach which is an old favourite and a reliable all year round variety according to the source of Google!  I’ll try some in the polytunnel and see how I get on, maybe putting some in and out to compare?

Mixed salad leaves are another vegetable we use daily, combined with the spinach.  I have to be careful not to run out as we do have a lot of it, which is the case right now actually.  There’s lots of varieties that you can choose from year round, however I’m going to try a few different ones and will report back!  In the photo below you can see I’ve multi sown radish and just off the shot are peas which I hope to overwinter. 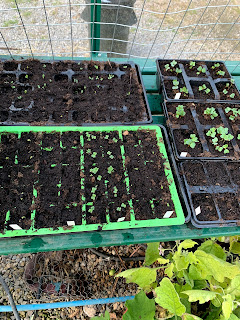 This weekend saw me spending a good few hours in the polytunnel stripping it of the tomatoes that were in there, taking all of the tomatoes off them meaning I have zillions of green tomatoes now.  I did a little video on it here if you’d like to see.

Take care everyone, lots of things going on in the world so take care of your own little world.

Leave a Reply to Frugal in Essex Cancel reply