They are funny looking things, really small too.  Very flighty but lovely to watch.  We have 6 girls and a boy which we bought from a rescue centre called Wetheriggs Animal Rescue located at Thorpe Farm Centre on the A66 near Barnard Castle.  They have some Old Spot cross pigs which are due a litter in a month, so this is where we will get them from.

Grace managed to get a close up on arrival.  Pretty cute. 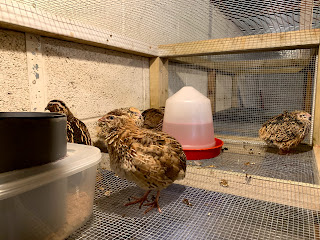 This is the view inside a pen, food on the left and a drink further down.  Quail have their own type of food, so won’t be on the poultry feed.  They have a mesh floor which caused us many discussions and sleepless nights, yes really.  All reseach suggested this is how to keep quail and then the muck drops through.  We were not sure about them walking on the mesh, but actually, they are just fine. 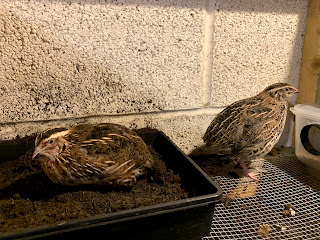 We have a dust bath for them which they love and this is where they lay their eggs!  We’re going to also put some foliage in for them to hide in, now we have them, we’re learning what we think they would like and of course we adapt as needed, as a smallholder you just have to. 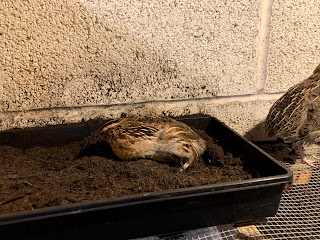 We shall incubate the eggs and hope to raise more of our own this year.  Quail are quick to get up to breeding age (6-8 weeks) unlike chickens which are 22.  Also little fact, if you’re not allowed to keep poultry in your area, you can maybe keep quail as they are game, not poultry 😉

So all in all a very successful weekend with regards to quail.  We didn’t really get much else done on the smallholding as we had lots of other commitments this weekend plus we had a poorly dog and a poorly Ste!  Hopefully the latter 2 are on the mend now and we can play catch up during the week.  Time stops for no one 🙂

5 thoughts on “We have Quail – new additions”