Skip to content
**I couldn’t get away with wordpress so came back to blogger (apparently a lot of people don’t like blogger but better the devil you know for me).  I only did a few blogs on wordpress to be fair, which you can find here should you be interested.**
Regardless, and despite its name, this post is about looking forward with learnings we have from the past, mulling things over, planning for 2020 and so on.
I don’t know about you but January is a time for reflection and planning for me, in that order I think.  We are just starting a new decade, we have been on the smallholding for 4 years coming up and we are thrilled to be planning our biggest year yet!  I have said that before, and do you know what, it always has been.  For one reason or another we’ve done more, learnt more or overcome more each year.  The list goes on.  This post is going to be very wordy, so I am going to throw some random cute old pics in just to break it up 🙂

﻿﻿﻿﻿﻿﻿﻿﻿﻿﻿﻿﻿﻿﻿﻿﻿﻿Back in December 2015 after selling our family home, we were in limbo, literally homeless. We were  generously offered to use my Uncle’s house whilst he worked away which was a blessing.  During our time there, I gave some thought to what supermarkets to use once we moved to the smallholding as we had been an avid Aldi shopper for 5 years + by then.  Over the last 4 years we have been up and down with shopping, trialling Tesco, Aldi, home delivery, local grocers etc.  What’s interesting is that the grocery budget in 2016 is exactly what we are setting for 2020 – £300 a month and for 2020 that is a MAX each month, starting with January’s pay at the end of the month.  What I do know is that, for this year at least, with the lifestyle we are aiming for, shopping at Aldi once a week is the answer for us.
2020 for us is all about minimising our outgoings and maximising our income.  Now that doesn’t necessarily just mean financially, it could be about reducing waste all round or using what we have more appropriately, both financially, within the household and even health wise (mentl health included).  It can be applied to a multitude of areas such as spending less, earning more, not wasting food, growing AND USING your own food, using less plastic, not wasting time on things that don’t matter…. but let’s not run before we can walk.
Over the next few blog posts I will share some thoughts on what I mean by this and how we can apply it through 2020.
In many ways we are so much further on than when we started in January 2016.  Our knowledge on growing our own food and raising our own meat has come on leaps and bounds.  Saying that, no matter how much you know, there’s always more to be learnt.  Steven has produced some magnificant woodwork items, been painter and decorator, handy man and maintenance man, learning things we would have only dreamt about previously.  I have taken on so many more skills in the veg plots, kitchen and research which against Steven’s list looks minimal but there’s a lot to be said for those skills.
Something I definitely want to (need to) improve on now we have growing skills is ensuring we harvest everything timely and not only that, but using it!  I am terrible for letting the courgettes grow huge and then letting them go to waste.  Not only courgettes too.  Generally, growing your own goes from a snail’s pace, impatiently waiting for the first shoot or fruit flower, to being over run with produce and not having enough tubs, jars,  freezer or shelf space to preserve it all!
I have mostly cooked from scratch over the 4 years, although we went through a spell of eating and drinking out far too much.  There was a bit of “we work full time so can enjoy it” conversations combined with the excitement of new neighbours who eat and drink out alot!  We’ve now all settled in to our little routines, seeing each other for events or in passing on a summer day at the pub, so that has worked out very well indeed.
Having said minimising outgoings could be other things, it obviously does gravitat around finances for this year.  Part of the reason we want to cut the spending is to try and get 6 (then 12 etc) month’s wages saved in the bank.  As noones job is as safe as houses and given we still have a (large) mortgage to pay, we need a decent income and we don’t want to be caught short if life throws a curveball.
So throughout the year, when we feel a splurge coming on or the week leaves us feeling weak and can’t be bothered to make the effort, I/we will remind ourselves of why we are doing this.  To protect our future as well as live a healthier, more fulfilling life.  It’s all or nothing for these 12 months and after that, we will reassess where we are and how we want to continue, but for now, it’s full steam ahead and lock down!  That does not mean no fun, no time out, and living on bread and beans.  Far from it.  I think this year will actually being more fruitful than ever in those areas.  We shall see.
Anyway, you get the drift.  We are going at this all out and I can’t wait.
Outside is going to be the biggest income of all, fruit and veg, so we need to treat it kindly and look after it.  So where do we start:
What should we be doing outside in January to allow for the best crops?
According to RHS website:  January is the coldest month.  In January, your garden could need protecting from frosts, gale-force winds and heavy rain. Check stakes, ties, fleeces and other supports for damage and consider moving plants to sunnier positions to maximize light. Don’t forget to keep feeding the birds, food is scarce for them over winter. You can also start planning next year’s vegetable plot.
I did feed the birds some bacon fat at the weekend but this has reminded me that we need to look after them.  We have a beautiful little robin that visits the veg plot and I’d hate to think s/he went hungry!  It is on the jobs list for Saturday now.

Since moving to the smallholding, we have added more raised veg beds, a “mini” orchard & started work on a paddock area which we are still undecided what to do with.  Last year it had pumpkins, corn and chard in.  There’s one solitary chard plant left and the rest has been turned in by the sheep.
One thing we have an issue with here is weeds.  We are going to get on top of them before they start this year.  Don’t get me started on the nettles, they don’t seem to have died off since Autumn 2019!  One method we have adopted previously is the lasagne method which is described in much better detail that I could do here.  We use horse muck which we have in abundance and we mulch during the year with grass and leaf clippings.  As long as the weeds are suppressed, we can work with the rest.  Luckily most of our raised beds are in great condition and we grew in them straight away, it’s just the new areas or those we neglected originally (priorities & time constraints) which we struggle with soil condition and weeds on.  So minimising weeds to give us back some time is a big outside priority this year.  As Steven always says, 30 minutes a night will stay on top, we can’t leave everything to the weekend.
The asparagus bed has pretty much died back ready to be cut and mulched for the really cold weather.  It would survive without mulching, however covering it to protect it from winter, looking after the soil and give nutrients back after such a good harvest is the least we can do.  Asparagus, along with rhubarb is one of earliest crops and comes any time from May and has been prolific every year.  I can’t wait for it, not only because I was gifted an asparagus knife for my December birthday from Steven – it’s the little things!  We popped a black dustbin over a rhubarb plant that hasn’t been forced in the last 4 years to see how that works out.  Last year we forced an early variety and it was prolific.  Rhubarb is one of my favourite plants, not least because it tastes amazing in gin 😉 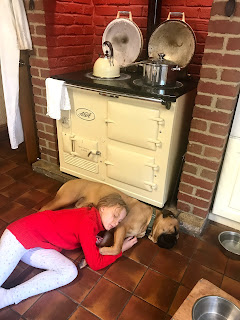 We can also start with repairs in the veg plot as we have recently sourced some free wood.  A few beds have dropped to bits through rot and others could do with raising a little, though we haven’t talked that through yet, so it might not be an option.  Therefore this weekend, we don’t have anywhere to be or anything to do (ie Christmas has seen us inside more than out) which can only mean one thing!  A day spent in the veg plot with a mug of hot soup to keep you warm and a full English to see you through.  Bliss!

I shall be posting at least once a week through 2020 and I hope you continue to join us on our next chapter in this fantastic journey.  Please, if you get time, drop a comment so I know this is getting out there still.
Take care everyone and speak soon 🙂