The last week or two were one of those mega busy ones that I’ve alluded to from time to time.  I had a full week of meetings, meaning I was at work later than normal, giving us less time on a night (if any!).  Grace is going to Senior school in September and had her induction day a week gone Wednesday.  I am pleased to say she settled right in after a scary morning of not knowing anyone.  She’s had party’s, performances, church services and lots of other things.  We’ve also thrown a party which saw 120 people pass through our gates.  It’s was fantastic and we thoroughly enjoyed it, though I won’t lie and say we’re not pleased it’s over.  It thankfully went without a hitch, however we had lots of left overs.  More on that soon.

The veg plot and friends
We have hit the busiest time of year!  I must admit we are struggling in the heat with the watering being so demanding.  Thankfully there is no hose pipe ban here.  We do try and save water in IBC tanks and we also make comfrey tea to save on using tomato feed, but there’s no getting away from the fact we are heavily reliant on the tap water right now.  As usual, when we are confronted with a problem, it sets us off thinking how we can avoid having it again.  You watch, we will be fully loaded with rain water saved when next year comes round, and it’ll be the wettest summer on record!

Our Autumn planted onions, shallots and garlic did us very proud this year.  We’ve just taken them all up and have hung them out on a make shift dryer.  I’m planning on keeping one of the best garlic cloves and sowing that again come the Autumn.  The shallots are Golden Gourmet and if they taste as good as they look, we will get those again this Autumn.  The onions are Shakespeare and Red Cross.  The garlic are Carcassone Wight and Provence Wight.

The onion bed is now empty, dug over and ready for the next lot of veg.  We were lucky enough to be gifted 40 broad bean plug plants, so I’ve started putting them in.
Another full time job is harvesting all of the fruit and veg.  It’s certainly not a hardship.  The first tomatoes are ready – a kilo of mixed ones.  These are going to be dried in the dehydrator as we love ‘sun’ dried toms, especially in a bread I make which is my daughter’s favourite. 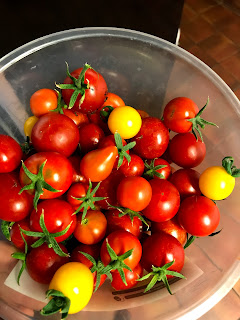 This is the second lot of peas, sweetcorn and second broad beans.  The first lot of peas and broad beans which are in another bed, are ready to be pulled up to make way for something else.

These cabbages and caulis I am so thrilled with. Today I have pulled most of them up, so they are being washed and popped in the freezer to make use of another day as we aren’t currently having meals that these veg would play a part in, it is just too hot. 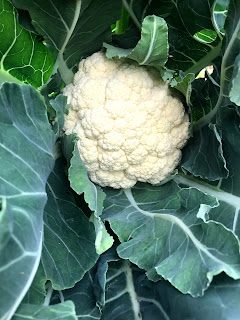 I am very happy with the leeks, but not the spring planted onions, something keeps going in the bed and turning it over, rather annoying.

The currants are always very rewarding: 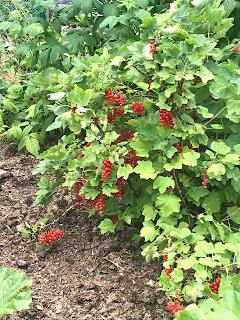 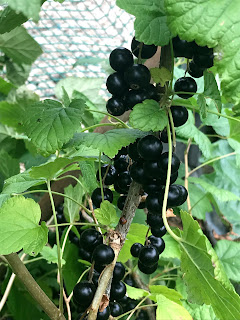 I am growing cucamelon this year, and they are doing really well in hanging baskets, so that is the way forward for me from now on (assuming we want to grow them again!).  It saves on space too.

I didn’t think I had grown any cucumbers as all I seemed to have is gherkins, which are very bitter when they get too big.  Anyway, turns out I did put some cucumbers in and they are doing great.

The pepper plants are doing fantastic and some seeds that I got from Dawn 2 years ago are proving perfect again this year.

Jack is using his no technology time to spend with me podding peas.  His concentration might not last long, but I hope it is memories in the making for him. 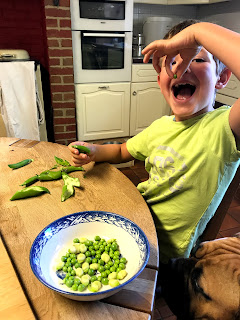 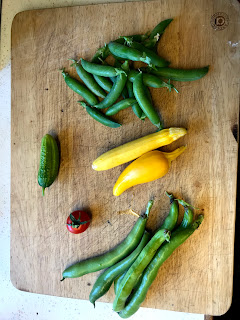 I have found the peas which we will stick to too, Victorian Collosal Climbing which I have mentioned before.  They are over 8ft tall and produce huge pods with the sweetest taste despite their size.  A winner! 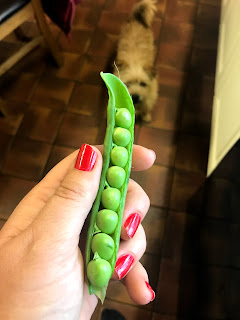 On the smallholding:
So we had a very hard lesson learnt here on the smallholding.  One of our 6 lambs went down with fly strike.  It was awful, truly awful.  I will spare you the details, I couldn’t even bring myself to get a photo and that in itself says a lot when I know what I have pictured in the last.  We did what we needed to do and paid the expensive lesson.  Thankfully we are talking financially and not the little lamb’s life.  He made it through, though I had one very sleepless night thinking he wasn’t going to make it.  This is him healing and in a very good place compare to where he was.  We know where we went wrong and it will not happen again.  He’s totally back to normal now, just needs his wool to catch up.  Aloe Vera gel is amazing stuff by the way, for healing skin conditions.  Here I am trying to get a photo with him and failing. 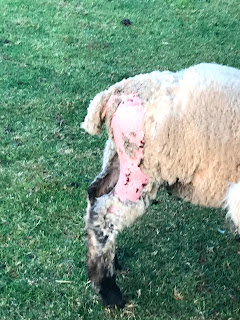 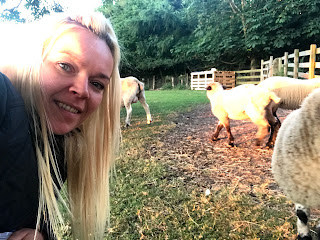 Then they all decided to get themselves stuck in a gate which was fun!

We’re desperate for rain, but I actually am so pleased hat we’re seeing a proper season!  I love to see the seasons change and this is what I imagine a proper British summer to be like.  The fields are sparse so we are giving hay to the horses and sheep.  We don’t have a lot of land so we need to make sure we use what we have well and buying in hay and hard feed is just a way of life here. 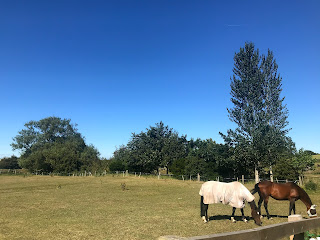 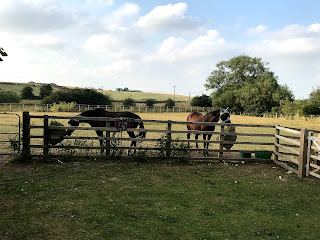 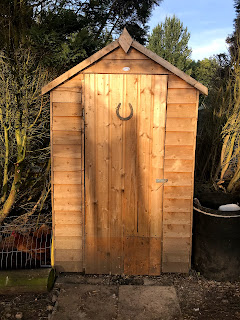 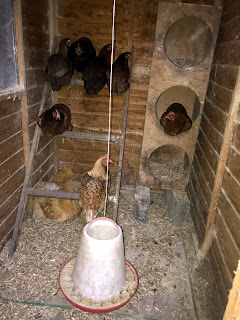 Quite happy in there.  Sadly they are now penned in but at least they are alive. 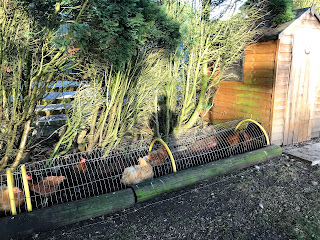 Another one just because: 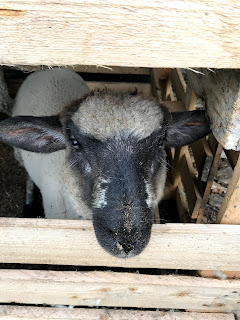 In the kitchen:
Rosemary is being air dried in the heat of the kitchen, ready for lots of winter stews and other uses.

Raspberry jam is my favourite and a pleasure to make.  Every year I am blown away by the taste.  Incidentally, my daughter is giving a jar to her teacher, with another item, as a leaving gift.

Annie is my shadow, just watching over me.  She is growing into a beautiful natured, strong and loyal dog.  Her gentle nature is just perfect.  She’s 8 months old now, so lots more growing and maturing time. 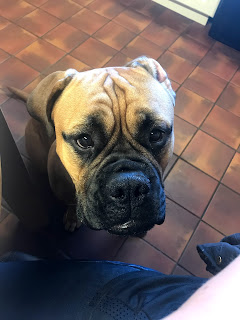 Grace and Jack are still making their own choice items.  Both chose gingerbread men, which were really nice. 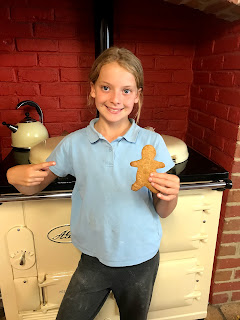 I normally give an “In the house” update however we have had so much going on outside that there’s very little happening in the house.  However our party had some fabulous photos to share with you.  We’ve had a lot of left over food, some of which is in the freezer and some we had in the following days.  We had enough breadbuns to sink a ship though.
Jack on the tree swing. 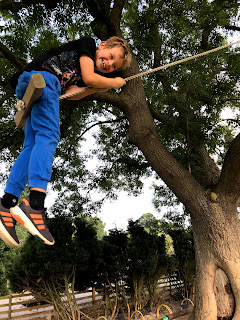 My family getting quality time together.

Love seeing people enjoying each others company at our place.  Everyone deserves that chill out time.

My Dad and Ste doing a grand job on the bbq.

My Mam and her friends, enjoying some food and sun.  We were so blessed with the weather.

My Nana and my aunty (her daughter in law)

Table tennis table for the kids and big kids 🙂

My uncle keeping the sun off his bonnet haha.

We ordered a bouncy castle obstacle course thing for the kids to enjoy.

We also have a nest of swallows (or swifts?), of which since this photo was taken, have all safely fledged. 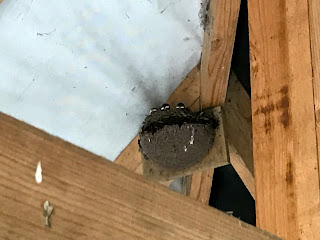 So life is fantastic. Learning every day!  Struggling to sleep on a night though, due to the weather, work is easing up slightly, the garden is producing, Grace is moving on to senior school, Ste is enjoying the veg garden more and more and Jack is getting used to no technology nights.

Hope everyone is well xx

16 thoughts on “A true British Summer”