As usual, at the beginning of each year I will reassess our budget to include changes.  For example, my daughter is going to senior school and we promised we’d get her a mobile phone for when she does.  She is the only one in her year who doesn’t have one and throughout this year has been very mature about that, not giving in to peer pressure.  So there’s an extra monthly expense.  Not much, but it all adds up.  The insurances need to be reassessed as I have an additional insurance to take out for Annie, so that needs to come from somewhere.  Also oil has gone up since 12 months ago and I think our budget still covers it, but I will check to be safe.

A big one that can easily spiral out of control is groceries as per my previous post.  Last year, on average I went over our (£250 a month) budget by £15 a month.  Some people spend that on coffee each week so it won’t seem a lot to them, but taking into consideration what we are trying to achieve (self sufficiency and 1 dependent wage only) then again it all adds up.  However I am really pleased that we got anywhere near the budget and that I think, is the home raised meat, fruit and veg earning its keep.  So if we do even more this year, we should be able to meet the new budget.

2018’s grocery cash budget is £2650 which works out at ~£220 a month.  However I expect to spend more in February-April before we reap rewards of this growing season and then at the end of the year as things tail off.  In the height of summer, I hope to have this down to a minimal amount.  Throughout January we are eating from the freezer for the teas, which I will need to top up with fresh veg etc but for the main expensive part (meat?) will be from the freezer.

Vouchers and freebies will not come out of the budget – let’s call that luck.

Now remember, I have 2 young kids who have packed lunches every day and who I won’t see go short for things they like (they aren’t demanding, this is my decision).  So sometimes, there’s things on the list that are not necessities, but if they fancy having their friends round and eating junk a few times then that’s fine with me.  To be fair, they very rarely ask to do this, but I’m just making my point.  I also have a huge husband who eats almost as much as my horse!  Ste and I are taking lunches to work, usually soup, salad or left overs.

I am updating my standard shopping list for each week with items that go into the packed lunches including fruit, wrap/bread/croissant and filling, yoghurts, a treat, pepperoni or equivalent, a drink, cheese (if they feel like it).  This may be the actual item, or the ingredients to make them (like the bread and treat).

Once January is through and we’ve made a dent in the freezer, I will then look at batch cooking again and doubling up on what I am cooking to make one for the freezer.

I plan on giving weekly updates with grocery/eating out spends.

As is customary on long text posts, here’s a cute photo 🙂 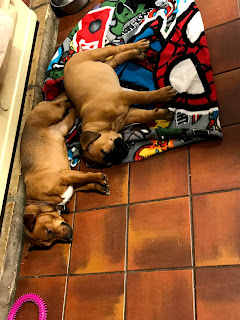