It always amazes me as to what nature offers at different times of the year. As we move into the months where people generally catch colds, feel tired and under the weather, if you take a look around you, nature has its very own remedies.  Elderberries shiny and black. Well, purple but I’m not splitting hairs.

I was worried we’d missed the boat with them as last year we did a bit and many had started to droop and shrivel. Not this year, even Ste was exclaiming at how good they looked. Tree after tree is laden with them, plenty for us and plenty for the birds.

I forgot my phone when we went out foraging, but we had a good time, even Jack who was feeing grumpy cheered up in the end. 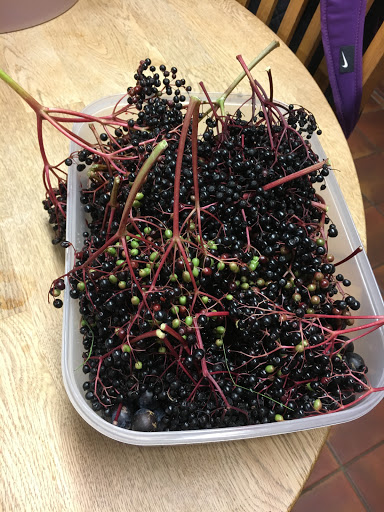 That was yesterday, perfect Sunday! So today I’m making elderberry syrup.  I made a small batch of this last year and then didn’t make more however this year I hope to make lots more to water bath and keep using until the Spring.

Elderberries have been used for years as one of the most antiviral herbs on the planet.  Highest on the list is fighting off colds, sinus (inflammation) issues, nerve pain and fatigue.  Who knows about the others but I firmly believe in the cold fighting abilities, purely because elderberries have such a high level of vitamins/anti oxidants and and such like.  Apparently during the 1995 Panama flu epidemic the government employed the use of elderberry to fight the flu. Who knew?

We harvested a large tuppawear tub full of elderberries and I set about using a fork to pull each berry off.  Soon enough I had 2 helpers who thought what I was doing looked interesting.  I can’t tell you how much it pleased me to have the kids want to help in a task like this. As you can tell, we weren’t dressed to look photogenic, but an honest photo at least! 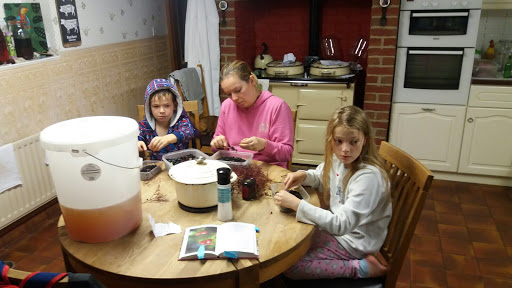 Apparently you can freeze the berries on the stalks and then they come off even easier but to be honest it wasn’t too much of a chore. I washed the berries and put them in a large pan.

I covered them with just enough water and brought it to the boil. I chopped some root ginger, guessing the quantity. I put maybe a thumb size piece, skin too, roughly chopped into the pan. Boiling it for 5-10 minutes. 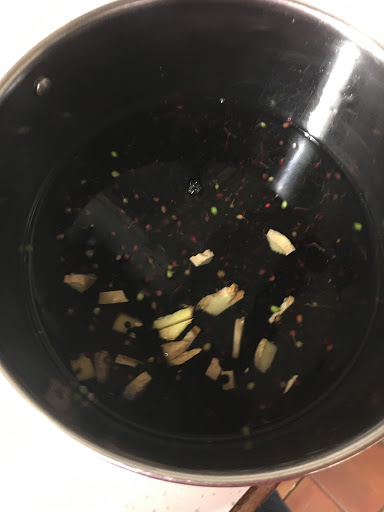 The recipes online mostly say to let it drip overnight or mash with a masher. As I’m always pushed for time, I used my hand held blender and zuzzed it all up. 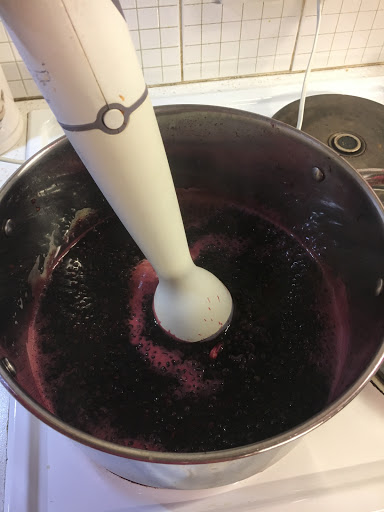 I sieved it into a clean jug through a Muslin and I had 1 litre of liquid. I added 1 kilo of sugar and a cinnamon stick then simmered it and brought it back to the boil for a minute once the sugar had dissolved, decanting it whilst still warm into sterilised warm bottles. It’s actually really nice and we’ll be taking a spoonful of this every day to ward bugs off. If we’re ill, you can take a spoonful every couple of hours for a vitamin boost. 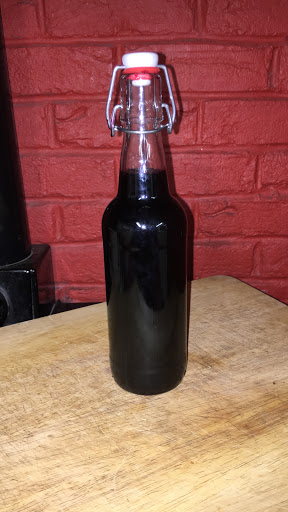 This should keep a couple of months in the fridge but it won’t last that long. When I make more I’ll water bath them.