I can’t quite believe it’s Sunday night even though we’ve packed a fair bit into the 2 days.

I’m starting to plant out the seedlings that I sowed last month. This weekend I put the cauliflower and Savoy cabbage in, put collars on them all and covered some with the 2 mini polytunnels that I bought. They aren’t actual polytunnel material but I think they’ll keep the the heat in all the same.

I cleared the area and raked in a few handfuls of fish, boood and bone before stomping the ground down where they were to be planted. Cabbages and cauliflower like to be in firm ground and and tredded in. The Savoy cabbages are 22 inches apart and the cauliflower were 30 I think. 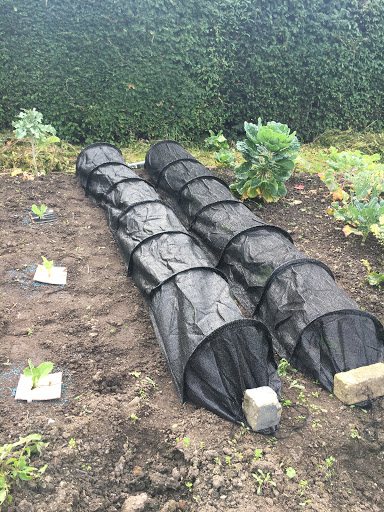 You can see the the collars in both photos. They stop cabbage root fly apparently, so on they went.

The below photo shows the yellow tube Steven has started putting over the beds. As he fixes the beds, he’s adding the tubing which will be a slow job but I’m sure he’ll have it done before the Spring. 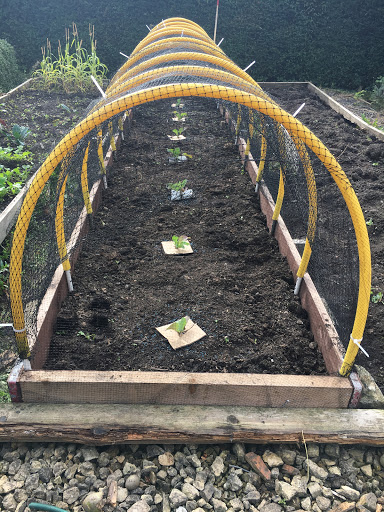 Today I’ve sown more seeds as I like to sow more when things go into the ground. I put in some All Year Round cauliflower, Valdor winter lettuce, All Year Round lettuce, boltardy beetroot and some Raab 60 day broccoli. Most of these things will be grown under some form of protection be it the greenhouse, polytunnel or fleeces and cloches. I also put the Cape Gooseberry plant into the polytunnel ready to over winter in there.

So many more things going on which I’ll share this week when I get the photos.