Tonight has been a mix of lots of different things which wasn’t my intention, but you know how things go. There’s so many things in season at the moment, I can’t stick to one thing.

At the weekend we foraged for rosehips which I wanted to turn into rosehip syrup as I’ve read good things about its health benefits. The most commonly talked about benefit is that the hip is loaded with vitamin c. It was hugely popular during the Second World War when the whole berries were added to jams, jellies and casseroles. The syrup was taken as a tonic to ward off winter ailments. My Mam has fond memories of foraging with her dad after getting the local bus and walking some distance to pick the bright red jewels. 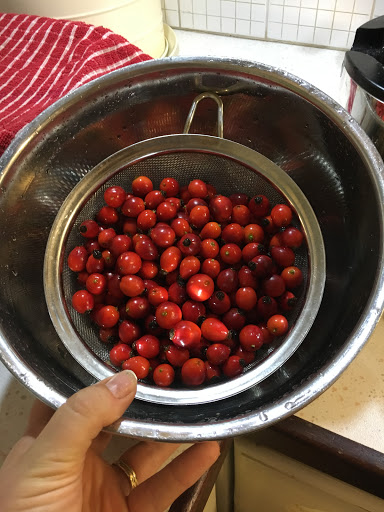 Although it’s not proven to ward off these winter nasties, there’s more belief that they can reduce aching joints.  Something we could all do with in the winter!

I followed Pam’s recipe which calls for 500g of picked over, rinsed rosehips. I popped them in the food processor on the chopping blade as she states they need to be minced.

Then add the minced hips to 800ml boiling water, boil for a few seconds or so (mine was most likely a minute or 2 by the time I realised!) and then and bring off the heat to sit for 15 mins.

Scald a jelly bag and drip the hips and juice through, leaving them for an hour. 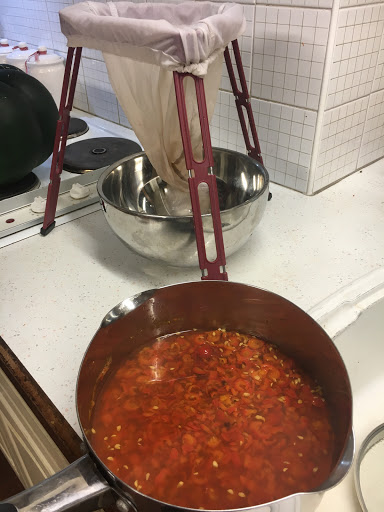 Whilst they were resting I thought I’d take a photo of the Aga at work. 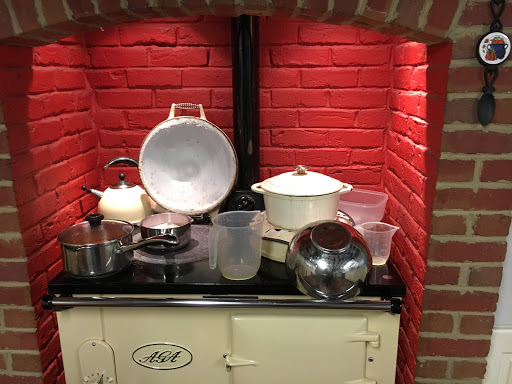 The aga really does come into its own in autumn and winter. Only last night did I put the chicken bones in with some (raw) veg that my Mam kindly chopped up for me after Sunday lunch. I left it in for 24 hours in the simmering oven. Sounds extreme but it produces the nicest stock ever. To be fair I’ve only ever tasted mine, so the bar may not be set very high!! Above, the stock is in the cream cast iron pan waiting to be strained and frozen.

After an hour, I brought another 800ml of water to the boil and added the pulp from the jelly bag and repeated the quick boil then drip process. This time I will leave it to drip overnight. I’ve stored the first lot of juice in an air tight tub in the fridge in the mean time. 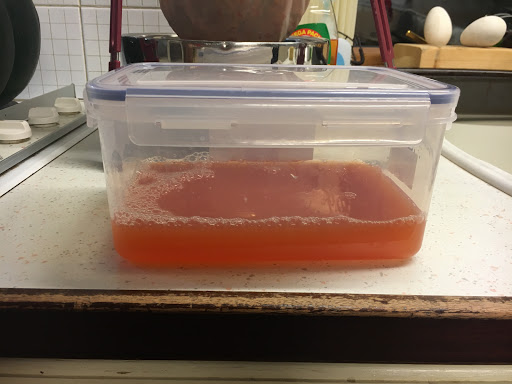 The second lot of juice will be added to the first in a pan with 650g sugar. Pam says there should be around 1 litre of juice in total to add to the sugar. Then warm it through, boiling and stirring for 3 mins to dissolve the sugar and then bottle into sterilised bottles. Water bath if wanting to keep for longer than 4 months in the fridge. I’ll be taking a daily dose from tomorrow so I will keep you posted!

I was gifted 1.5kg of tomatoes tonight by my lovely neighbours parents. So I made it up to 2kg and washed the tomatoes, chopped them in half and put them cut side up in the roasting tin with some bashed up cloves of garlic. They were sprinkled with sugar and seasoned then olive oil drizzled over before roasting for an hour. This has to be my favourite flavour of summer. 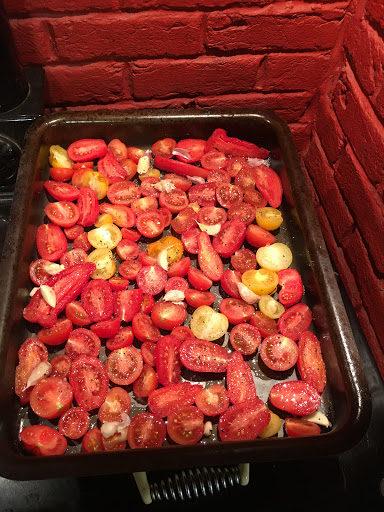 I pushed the roasted tomatoes and garlic through a sieve and puréed them so everything except the seeds went through the sieve. 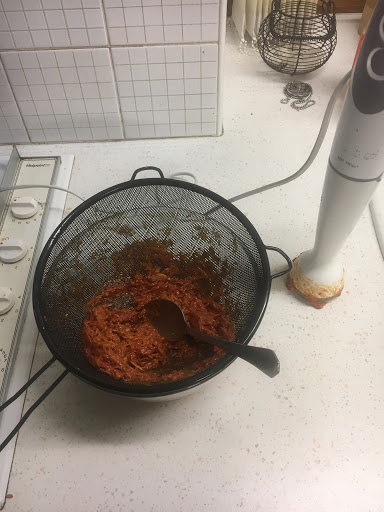 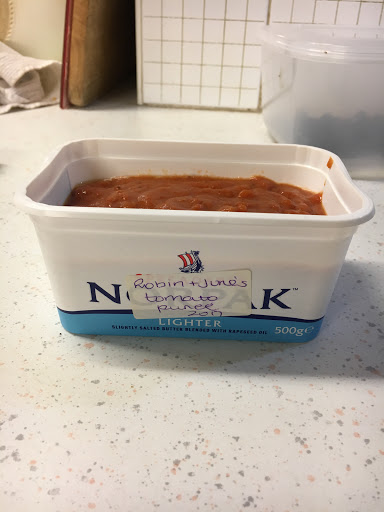 After it cooled it went into a used butter tub and labelled with the couples name who gifted me them. How kind!

Finally I started prepping a fridge pickle as Louise calls them. Using the food processor again, I had 1kg of cucumbers and 3 small onions sliced in seconds. 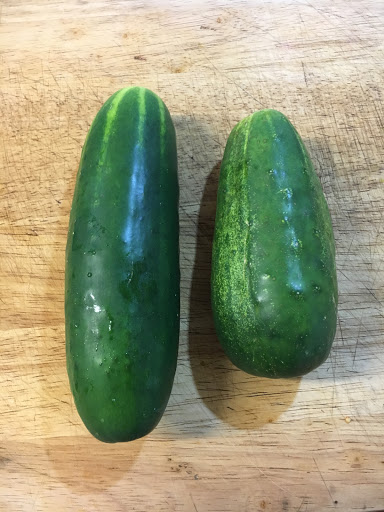 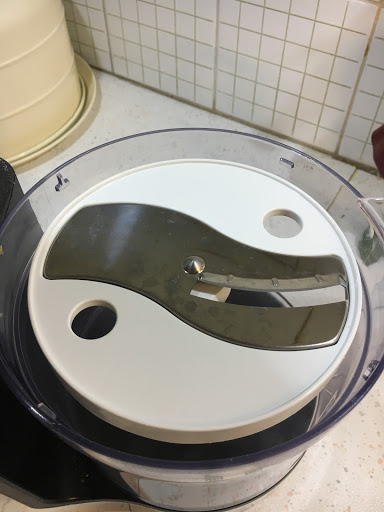 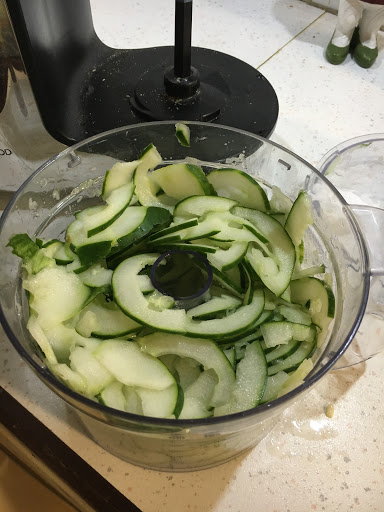 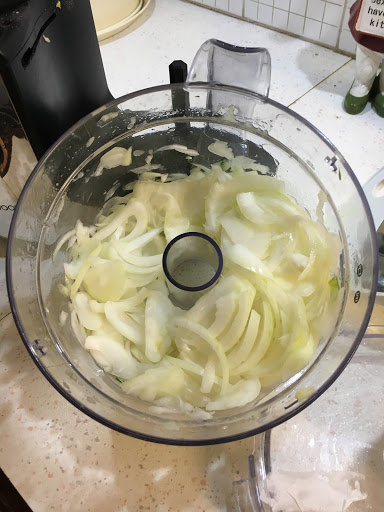 I put them into a bowl with 250g sugar, 1 tbsp salt and 200ml cider vinegar. They’ll soak overnight and I’ll update this post tomorrow to show the next stage. I can’t wait for these to be ready! 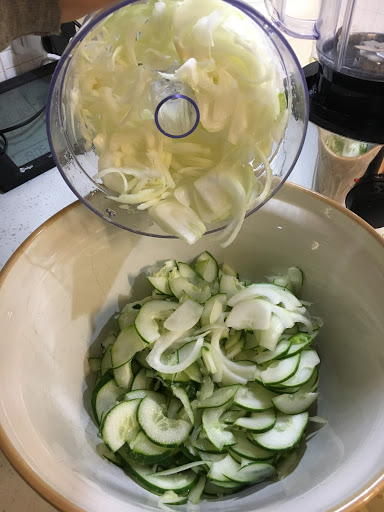 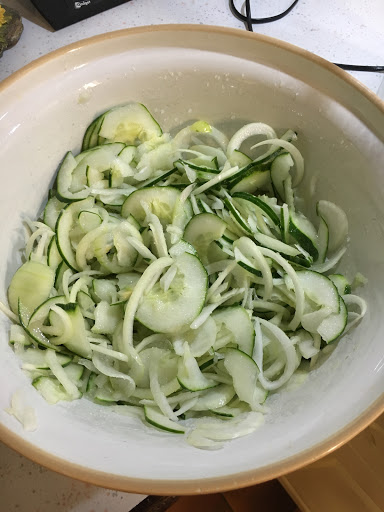 I hope you’re finding my preserving posts interesting or possibly even useful. I am really enjoying doing them each week.