What beautiful weather we’ve been having, perfect growing conditions with long sunny days and dare I say it, a long wet day on Sunday! The rest of the week is looking fine so I’m hoping to see some growth on my brassicas. They’ve been shredded to skeletal remains by something! The first batch do seem to be recovering but their growth is definitely stunted and therefore I don’t think brassicas are doing as well as last year. June will be the the deciding month. I think it’s been colder this year earlier on too. 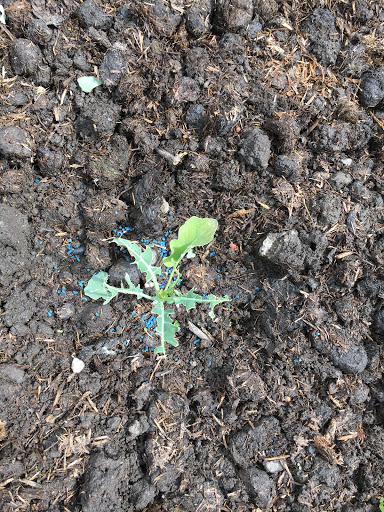 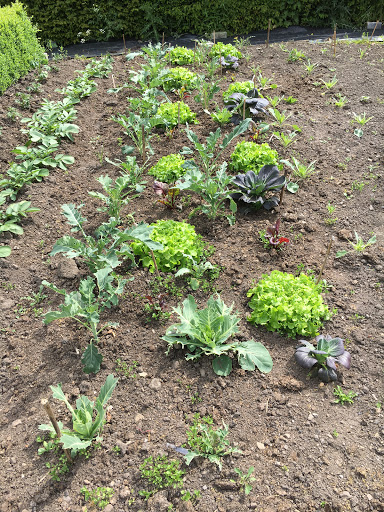 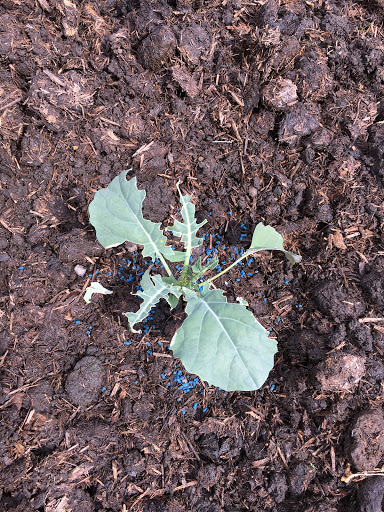 I’ve spent some great hours in the veg plot, greenhouse and polytunnel, though there’s many more hours needed in them. The weather I spoke of is great for the weeds too!

The tomatoes and peas are looking good though again, I don’t think we’ve as many peas as last year. Still time to sow some more of course and I have discovered just the spot for those.

A while back I sowed some Purple Top Milan turnips in the polytunnel and they all went to seed, so I am guessing it’s too warm for them.  The pigs had them for their supper last night.

In order to net off the fruit bushes growing alongside the rhubarb, we needed to harvest some more rhubarb which was fine as it’s had a rest since the last harvest.  Here’s Grace stood with some of the harvest and the leaves which were almost as big as her.

I tried to thin the carrots out a bit more and when I pulled this one out I nearly died of shock.  I’ve never been able to grow carrots before!

On Sunday we all went for a lovely, long, family walk out.

The dogs could smell something but we couldn’t see anything.  Maybe a rabbit was just here.

We also netted the strawberries as they have shot up out of nowhere.

As have the currants and gooseberries

Inspired, I then decided to have a wander round the veg plot taking snaps of how we’re doing.

I started planting up the bean bed.  This bed had the trenches dug in it a few month ago, which were filled with veg peelings.  I need to do that at the end of this year so they rot down better next year, but they will still retain the moisture in the bed which is needed.  here we have runner beans with sweet peas in the middle, and nasturtiums at the front.  This bed isn’t finished yet but only so many hours in the day.

This is my pea and broad bean bed which I’m just not overly happy with.  I’ve put some borlotti’s in the edge too to create an archway if they grow high enough, linked to the next bed.  I’m going to sow more peas, but this bed is the most disappointing this year so far.

Here’s the main crop potato bed which also has comfrey along the long side as I needed somewhere to put it.  Once it’s in, it’s in, so no going back now.

This bed has the early potatoes at the top and the tomatoes I’ve just planted out in the bottom.  There’s a lot of conflicting information about these 2 being planted together.  I’ve gone with the risky view as I’ve tonnes more tomatoes elsewhere, so if I lose them, I need to take it on the chin.  The early potatoes are due to come up any time now but they’re a little behind due to the cold weather start again.

Here we have my version of The Three Sisters which you can read about online.  It’s a method for planting your squash, sweetcorn and beans/peas etc together.  I’ve got sunflowers in instead with my squash and sweetcorn.  We’ll use the sunflowers for food for us and the chickens and also to sow as seeds again next year.

A happy nasturtium flower which are also edible!  I’ve not tried one yet.

All in all we had a lovely family weekend together.  The kids are off for half term now and they are also off next week for 5 PD days as our school clumps them all together.  Ste and I have taken this week off too, so I hope to get lots sown, grown, harvested and made during this time off.
﻿